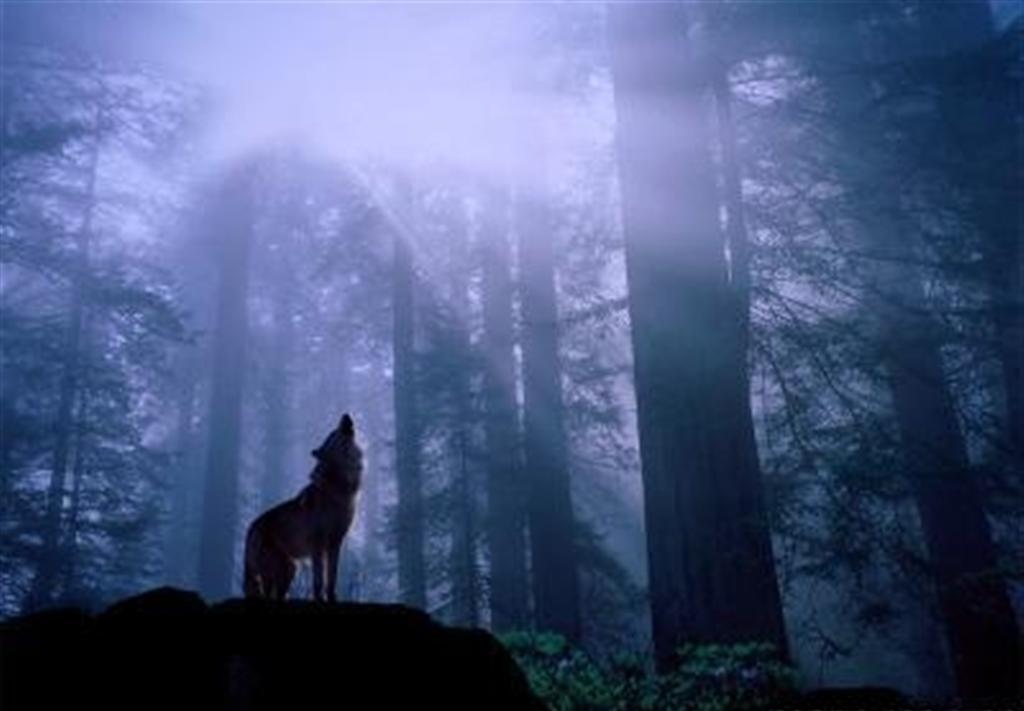 The Coyotes howl and yelp with delight.
At the passing runner in the night.
They stalk and yell to gather around,
other predatory yelling hounds.

In the dark they steal with silent feet.
Seeking the runner just ahead.
A lonely runner now with fleet feet.
Who should have stayed at home in bed.

Rushing, tumbling, dodging along,
the runner gasps their on her heels!
The end is near as she can hear.
The pack has found another meal.

The runner has run the last mile.
She stands next to the deserted bridge.
Coyotes are howling on both sides.
Fear creates her snarling smile.

Trapped and frozen in fear, she waits.
Knowing tonight she was out too late.
Yet, with determination and hate.
she faces this night a horrible fate.

In the dark they gather round.
Silent now their prey they've found.
For 15 minutes they chased her around.
Now they've only to knock her down.

Quietly...they stalk.  Moving close.
One after another when her back is turned.
Soon, now...very soon that first bite.
On a hamstring or calf to disable her flight.

Inches away, from her gasping form.
They growl their hunger lick their lips.
With blood drawn and appetite fits.
Smelling that 'time of month' she emits.

Then one pounces to give her a bite!
She turns to run .. there is no flight.
It leaps & misses her dodging form.
Calm descends upon her..far from norm.

She sees a Stop sign in the dark.
Turning towards it will end her fight.
So she edges backwards keeping strong.
The pack follows sensing her wrong.

Then suddenly in a inspiration.
She hits the sign with all her might.
Creating a crescendo of furious delight.
And sending the pack into darkening night.

All rights reserved, © Chuck Johnson. Copying without permission is forbidden.

Author's Comments
I love running at night, yet I often hear from women how scared they are to enjoy the darkening evenings.  Its a sad day when such a terrific exercise situation can't be shared by everyone.  Its also sad that they are right.   If only we could send ALL PREDATORS into the darkening night.

Yeah. I remember that. It was fun to experience their approach. Then as I was remembering it, I thought what if it had been a little gal and I then thought ...why she would have done the same thing! lol. Thats why I wrote it that way. Just to explore it.

This one really got me going from the beginning. I had this whole intricate metaphor worked out in my mind about how this relates to life and death... the harder you run (the more you cling to life), then all the more futile your attempt at escape. Or somethin... I dunno. Beautiful write though, I look forward to seeing more of your featured material in the future!

This is great Chuck.. I was in Canada in Feb of this year.. we stayed at log cabins for the first week which were situated on the edge of a frozen lake... one day we were walking the perimeter of the lake beside the woods... my brother spotted a lone wolf in the distance... he had spotted us before we spotted him.. however, he didnt turn and run... he had his head toward us and stood his ground as we approached slowly... he then moved a couple of steps forward and then just carried on as if he/she didnt have a care in the world... we carried on around the perimeter and saw his footprints... will never forget that.. well done good poem as always..~Katie~

Canada is a whole different story. Whoever said you could be safe in Canada has never walked the tundra and muskkeg into the arctic forests. Almost everything that walks there is either prey or predator. Without out a firearm and training, your prey. This poem is referencing the desert southwest of the US and in the Lancaster/Palmdale area specifically.