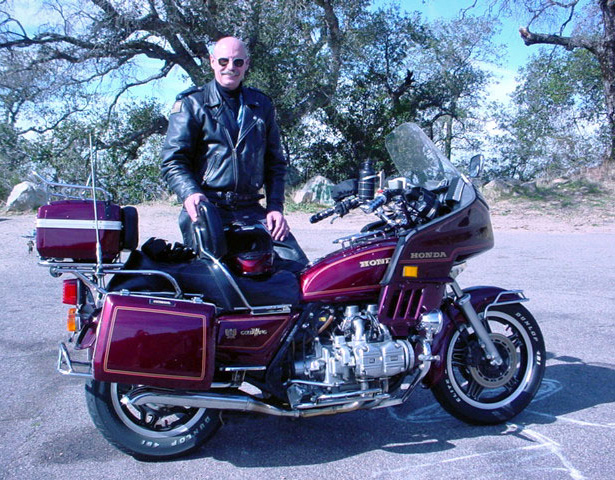 A trip in hell.    I got caught in the backcountry mountains between the deserts of California and the ocean.  I was riding the motorcycle and a huge thunderstorm, one of many passing by yesterday, began to surround me with lightning and thunder.   I was soaked through and the cold from riding caused me to shake so bad I had to stop.  I pulled into Pala Casino and had a mocha.  About a half hour later, I saw a break in the clouds, very small one, and took the chance.  I remounted and rode into the waning rain.  The roads were puddling water and runnoff covered some parts of them.  I ducked walked the bike through the worst of it.  Home safe and sound, I was chilled to the bone.   Ah! Another day in Southern California.

Oops, you forgot something.

The words you entered did not match the given text. Please try again.

Reply anonymous
3:35 PM on April 28, 2009
Hello, Chuck <br>Just floating through to see your beautiful work, <br>and to let you know I plan on getting to know Ca... <br>lots of beautiful areas throughout , can't wait to visit..thank you for sharing your knowledge with us.. <br>Linda

Reply will propecia work on hairline
3:41 AM on September 11, 2021
On Line Pharmacys In India

Reply fedsmoore
9:53 AM on September 18, 2021
lasix overnight buy no prescription

Reply gabapentin cost
1:16 PM on October 9, 2021
Can Pregnant Women Take Amoxicillin
123Next »
© 2003-2015 Charles Allen Johnson All Rights Reserved. If any unauthorized copyrighted material appears on my site, message me and I will remove it.